Crime of the Week

If you have any information about this crime or any person(s) involved, you are urged to call Denton County Crime Stoppers at 1-800-388-TIPS (8477) or submit a Web Tip.  You do not have to give your name.  DENTON COUNTY CRIME STOPPERS will pay a cash reward of up to $1,000 and you can remain anonymous. 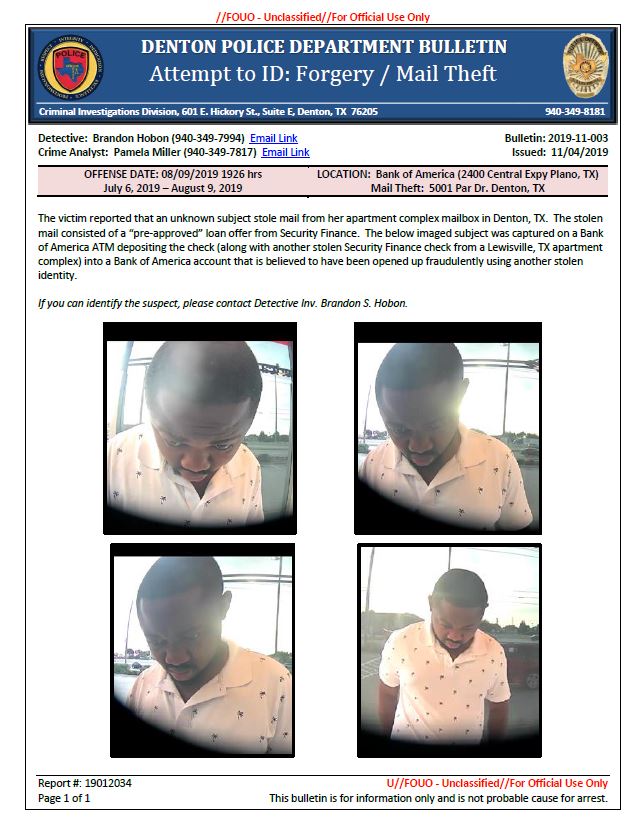 DENTON, TX, Oct. 2, 2019 – The Denton Police Department is seeking the public’s assistance in identifying and locating a suspect wanted in connection to three burglaries with intent to commit assault. The incidents occurred at apartment complexes across the City of Denton in which a 20-25-year-old white female answered a knock at her door, and the suspect then entered the apartment without permission.

The suspect is described as:

It is possible the suspect may be in an unknown model year small, white SUV.

Anyone with any information on the identity or whereabouts of the suspect is encouraged to call Denton County Crime Stoppers at (800) 388-TIPS (8477) or submit a tip online by visiting dentoncountycrimestoppers.com.

In addition, Denton PD encourages residents to remain vigilant when answering their door. Utilize your peep hole when opening the door and keep doors closed and locked when inside your home.

Visit www.cityofdenton.com for more news and to stay updated. 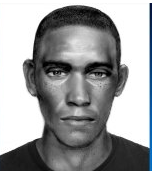 OFFENSE DATE: 09/08/2019 between 6:27 PM and 6:40 PM
LOCATION:  The Southwest area of Paloma  Creek Subdivision
Denton County Sheriff's Office is asking for assistance in identifying and locating a suspect of a theft of a package.
Anyone with information can contact Investigator Josh Vest at 940-349-1671, by email at Joshua.vest@dentoncounty.com, or contact Denton County Crime Stoppers At 1-800-388-TIPS (8477) and remain anonymous. 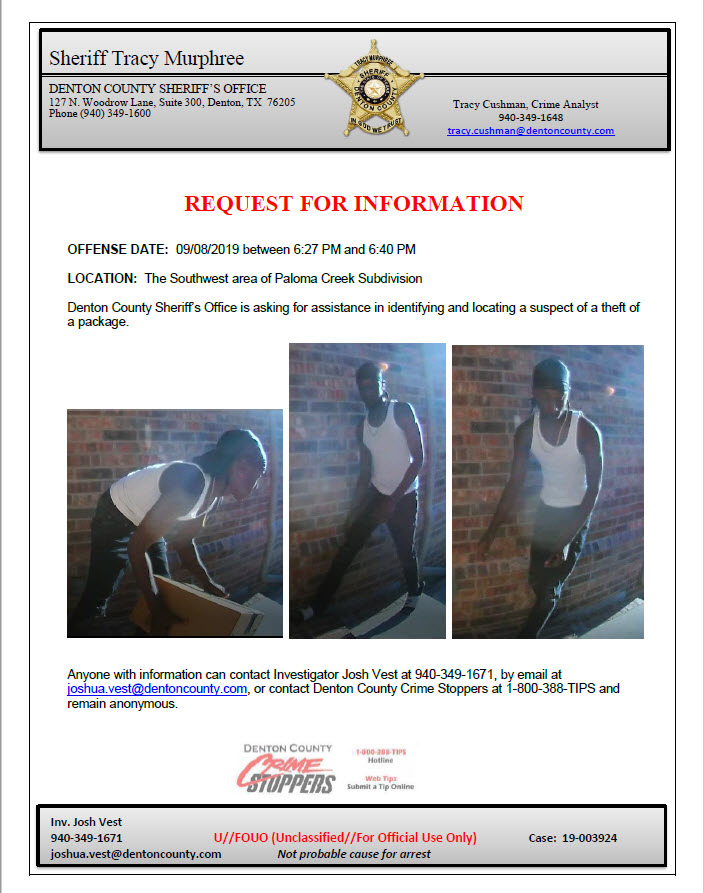 On 06/02/2019 we had a storage building on the TWU campus broken into. A 2007 John Deere Gator, model number TS4X2, was stolen out of the building. The numbers “116” were on the gator. Any assistance in locating the John Deere Gator or solving this crime would be greatly appreciated.  Please submit a tip if you wish to stay anonymous or you may contact Lt. Dadra Bundick or Sgt. Scott Fleitman with TWU Department of Public Safety at 940-898-2911. 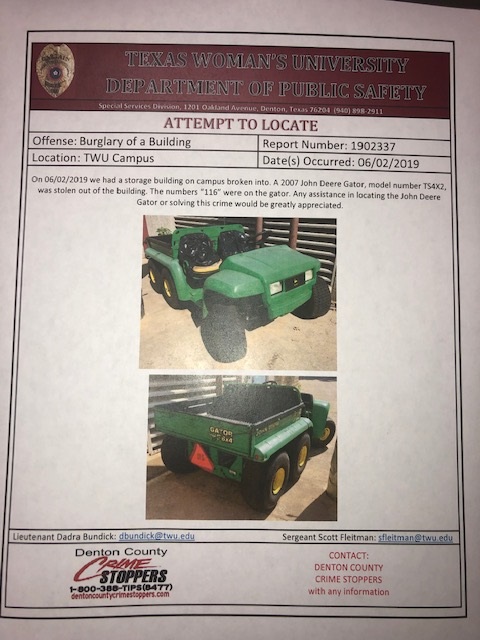 Denton County Sheriff’s Office is asking for assistance in identifying and locating a suspect of a theft of a package (picture of suspect and suspect vehicle attached).  The suspect is heard talking to the driver of suspect vehicle who is believed to be a male subject.

Anyone with information can contact Investigator Brice Hicks at 940-349-1665, by email at brice.hicks@dentoncounty.com, or contact Denton County Crime Stoppers at 1-800-388-TIPS and remain anonymous. 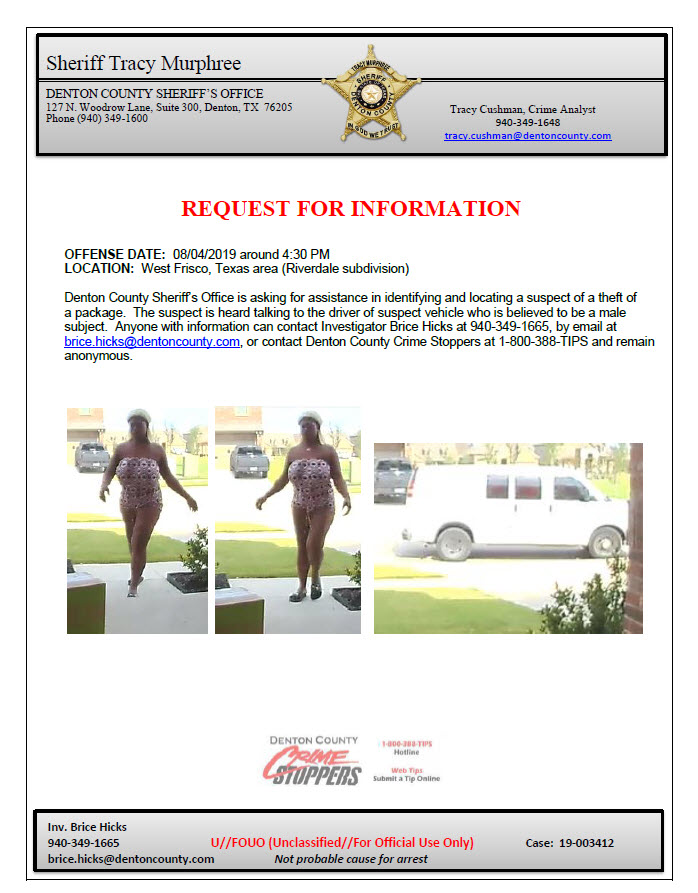 Attempt to Identify Robbery Suspects
May 17, 2019

STATUS: OPEN
Early Saturday morning (Friday night), at approximately 12:50 am,the clerk at the Circle K convenience store, 11801 FM 423, Little Elm, was robbed at gun point by two (2) males. Suspect#1 appeared to be a white male or light skinned African American who was wearing a black or dark colored hooded jacket, dark pants, and red Adidas shoes. Suspect#2 is an African American male wearing a white T-shirt and dark colored Adidas running pants. Suspect#2 appears to have a tattoo on his left arm. The Suspects were in possession of a dark colored backpack with a red lining. Both suspects were armed with dark colored automatic handguns. The investigation revealed that the suspects traveled to the crime on foot and came from the neighborhood just west of the store. The Denton County Sheriff's Office is asking for your help with identifying the perpetrators. If you have any other information about the incident that may help us solve the crime, please contact Captain Barrett at 940-349-1673 or if you choose to stay anonymous, contact Denton County Crime Stoppers at 1-800-388-8477 / dentoncountycrimestoppers.com 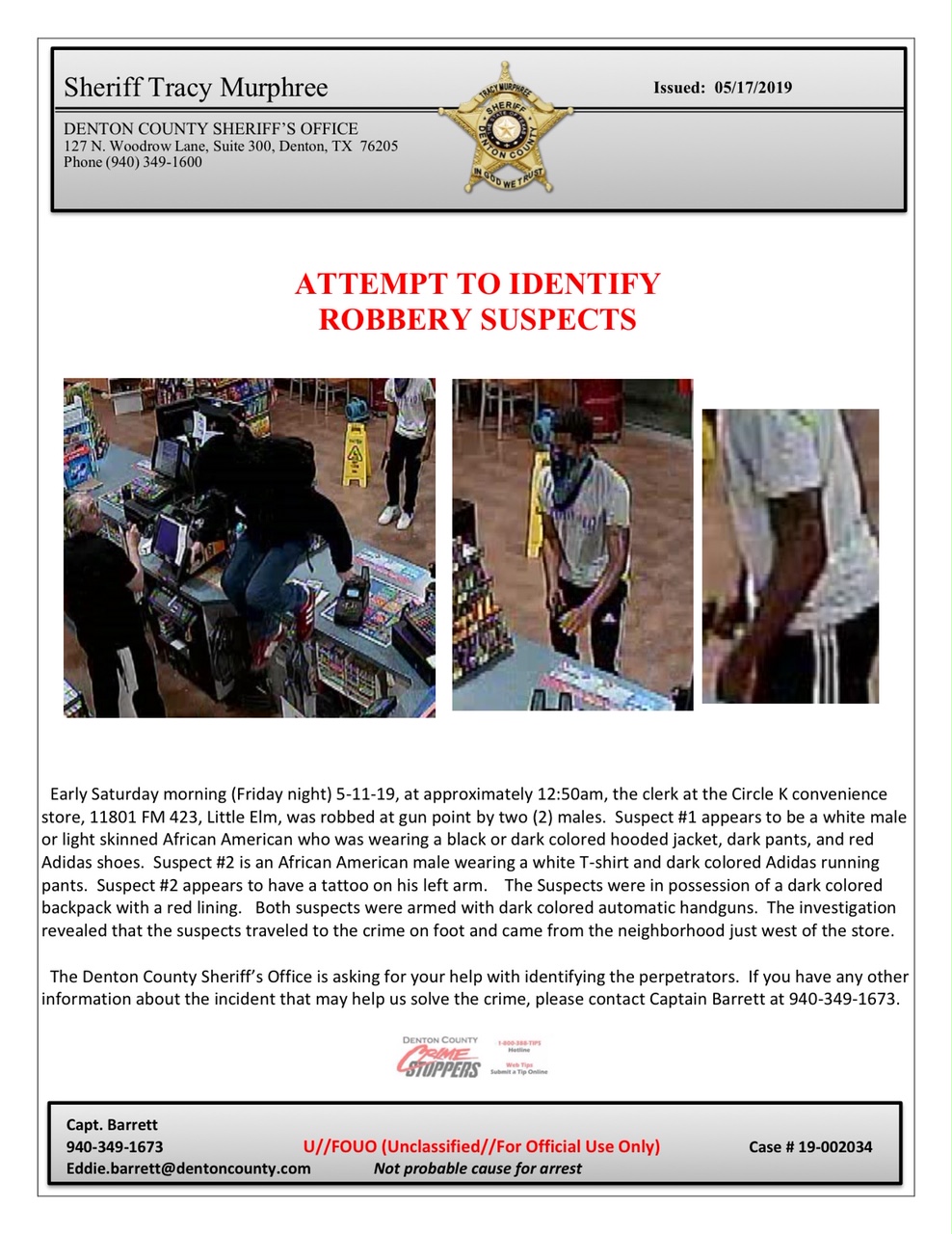 Identifying Suspects in Red Ford Mustang in The Colony
January 15, 2019

INCIDENT:  On Tuesday, January 15, 2019 at approximately 9:51pm, The Colony Police responded to a vehicle shooting that occurred in the 4600 block of Memorial Dr., near the intersection with Main St.

Currently the suspect’s identities are unknown.  We need the community’s assistance in identifying the suspects.  Please assist us in providing justice for the victims targeted by this highly dangerous crime.  If you have any information to provide that could assist us in identifying the suspects of the red Ford Mustang, please contact The Colony Police Criminal Investigative Division at 972-625-1887 or remain completely anonymous and call Crime Stoppers @ 1-800-388-8477, or download the mobile app and submit your tip.  You could be eligible for a CASH reward up to $1,000 if your information leads to an arrest. 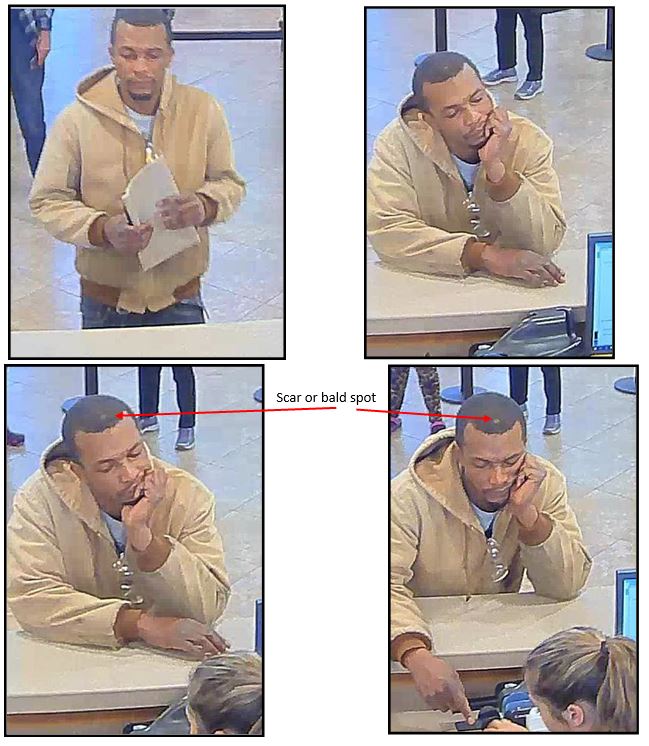 On 12/22/2018, a B/M suspect pictured bellow walked into the CHASE BANK and once at the teller’s counter attempted to purchase a money order. The teller could not process the transaction because the suspect was not an account holder at the bank. The suspect then told the teller he wanted to make a business deposit and handed her a beige money bag. Inside the bag was note stating that the suspect had multiple guns and for her to put 20s, 50s, and 100s into the bag. As the teller was putting money in the bag, the suspect also instructed her to put the robbery note back inside the bag. The suspect then left the bank on foot, walking in an unknown direction.

The suspect is described as a B/M, about 6’0”, skinny to medium build, short black hair with receding hairline, late 30’s, wearing a dark colored gray or green long sleeve button down shirt with a long sleeve black undershirt, safety glasses hanging from the shirt, a white card badge clipped to the shirt, and blue jeans. The suspect was carrying a beige money bag.

On 12/20/2018 a B/M suspect walked into the bank and handed the teller a note demanding money and claiming he was armed with two pistols. The suspect did not display a weapon. The teller gave the suspect an undetermined amount of money, at which time the suspect walked out of the bank, traveling in an unknown direction.

The suspect is described as a B/M with light complexion, approximately 6’1” tall with a thin build, 25-35 years old, with short black hair, goatee, wearing a tan or light brown hooded jacket with front zipper and dark blue jeans. The jacket was described as stained or “dirty”. The a round scar or bald spot was visible in the suspect’s hair, and was in line with

the center of his forehead about 1-2 inches from his hairline. The suspect had safety glasses hanging from the top of his zipper. 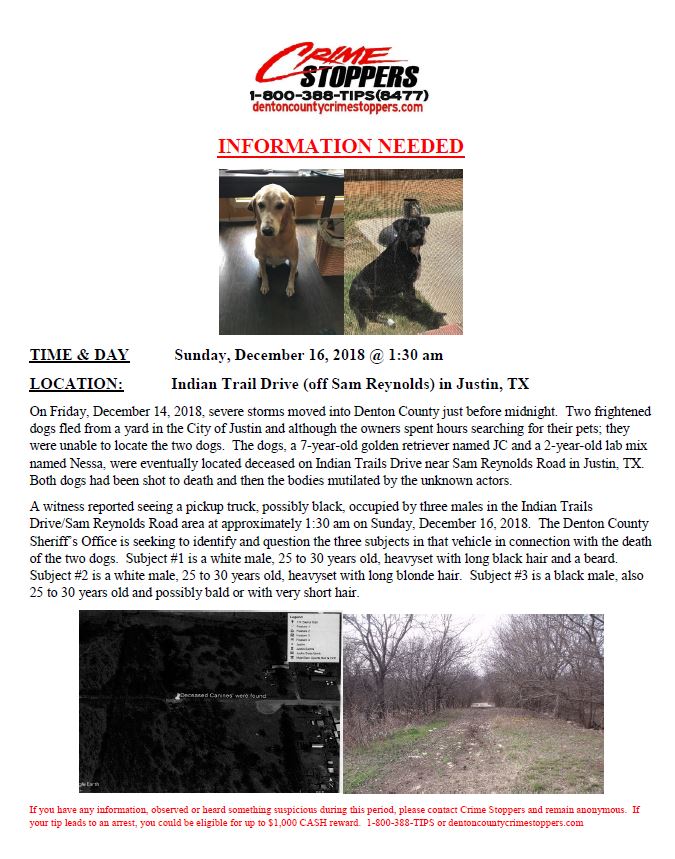 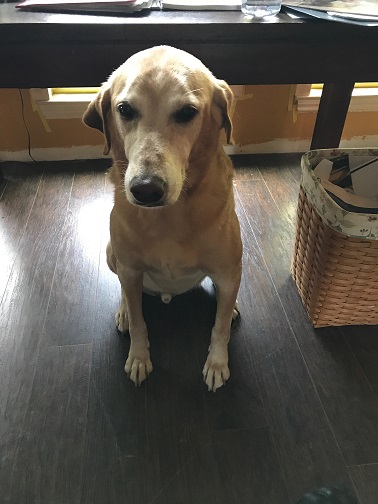 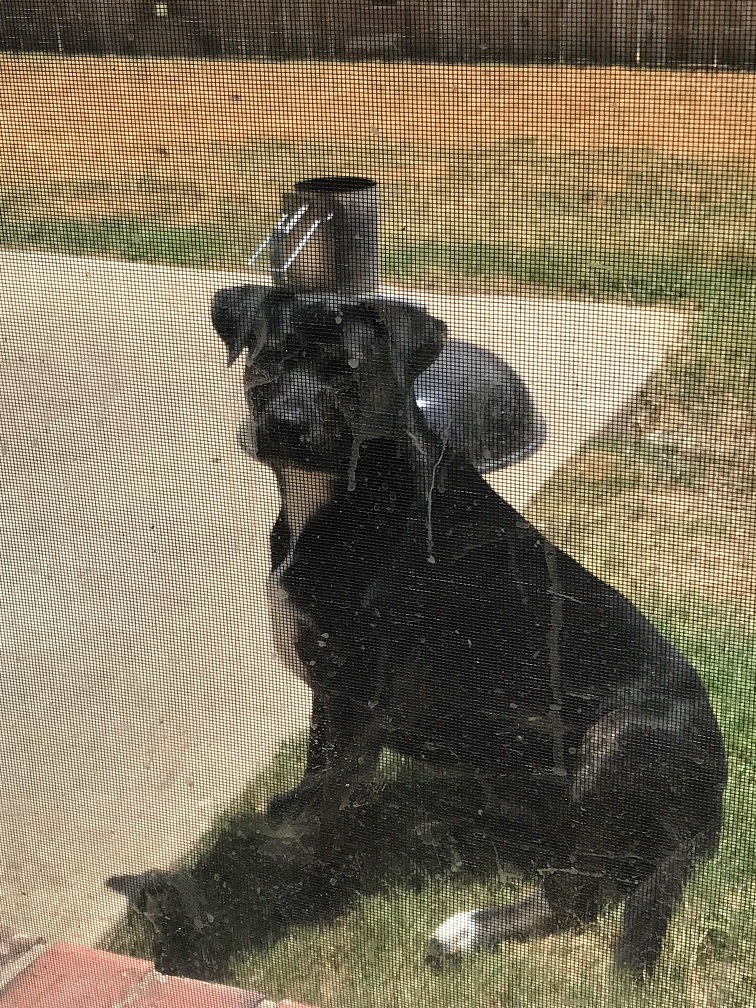